This blog is hosted on a quadcore VPS with 8gb of RAM. The price I pay is 5€ monthly, forever. Link to Contabo with my referral code.

Hi guys and girl, this is a tutorial for Mish, a smart alarm for backpacks.

I build it because my girlfriend had her stuff stolen in a hostel.

She woke up without the backpack that she had under her bed.

She didn’t have any money.

I invited her to stay at my house since we had met a couple of days before.

Probably without the thief we wouldn’t stay together right now… 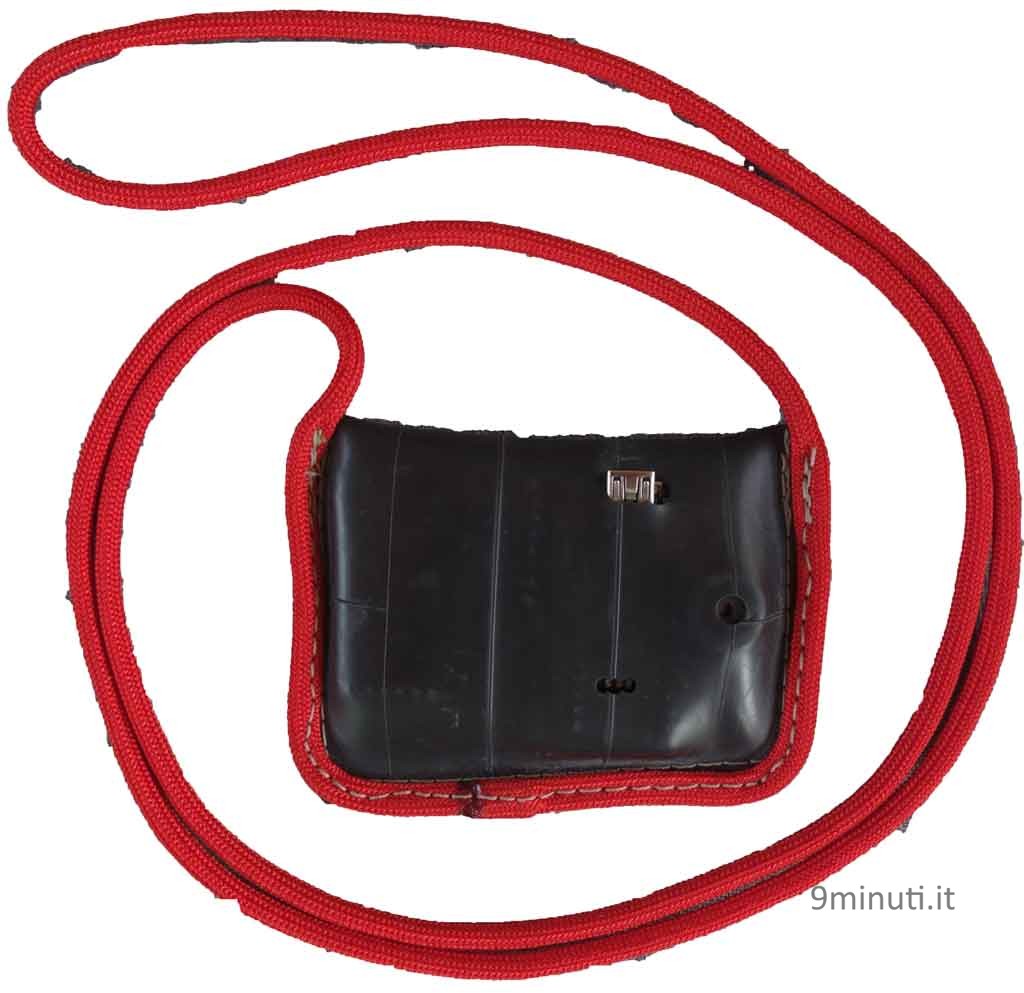 Well, but this is not a romantic post, this is a TUTORIAL about how to build a DIY alarm!

So, since she kept traveling around the world in hostels, I decided to build her an alarm so she doesn’t have to be hosted by random guys.

Now every time she has to sleep in a hostel she attaches her power bank to the Mish Alarm.

Then she connects with an app (I was using Serial Bluetooth Terminal) and activates the alarm.

If someone tries to move the backpack the buzzer is going to beep.

It’s very sensible. This is a video that I did so you can see how the alarm works.

As you can see it’s very sensible. You can also decide to change the sensibility.

In the morning, or when you need to touch your backpack, you just send another command to the Arduino so the alarm goes off.

Unfortunately, I never did a video of the construction. 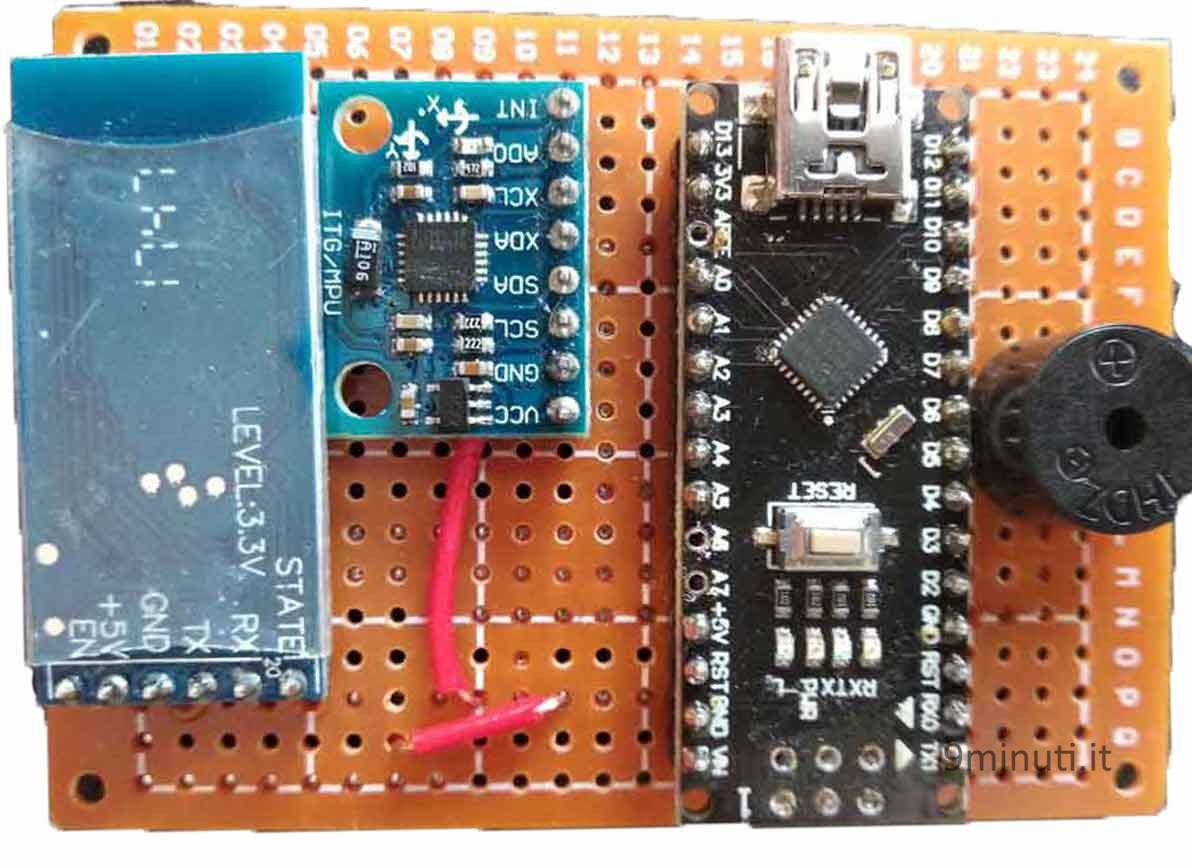 So maybe that are better ways to do the project or to accommodate the modules on the circuit boards.

I was also very tied by having my Arduino Nano with all the males pin on it.

So, if your Arduino is without pin, don’t solder them now and sold only the pins that you are actually going to use them. 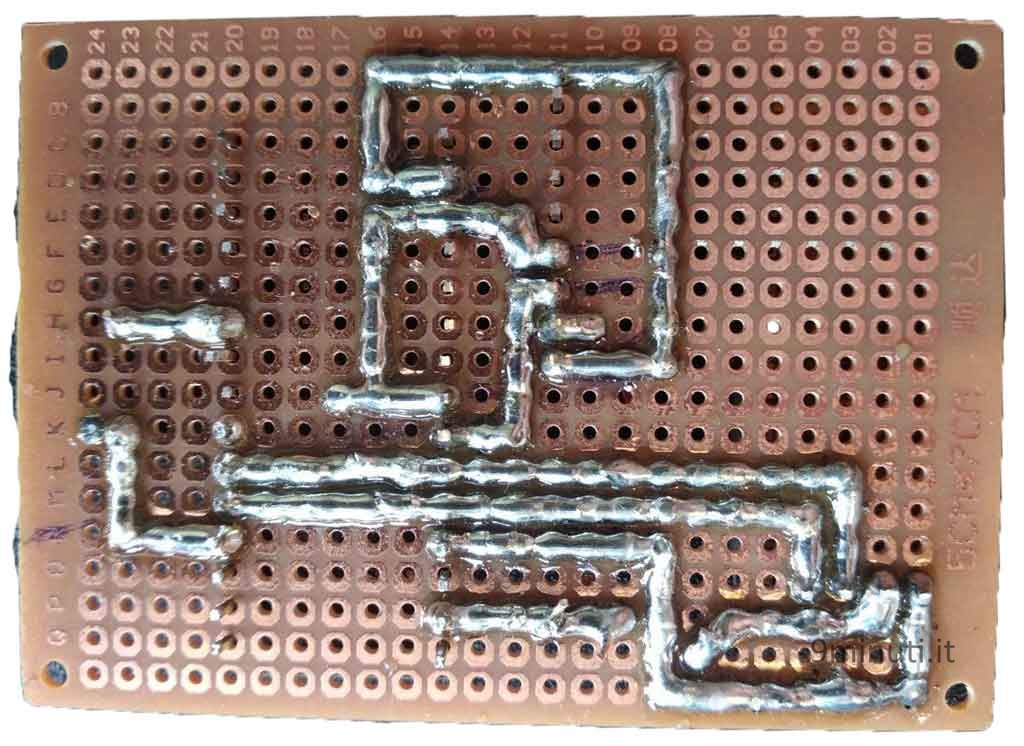 I’m not going to write a lot of instruction about the welding part because you only have to connect all the modules following the scheme that I posted.

The circuit of Mish

As you can see nothing very complicated.

You can, of course, change the pins but then you have to change them also in the sketch. 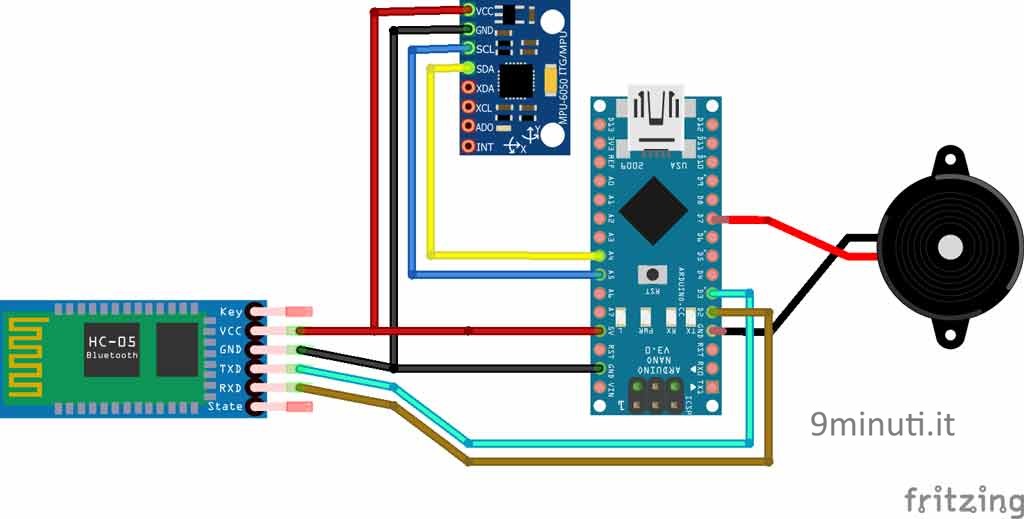 The sketch for Mish

Here you can find the sketch of Mish.

If you wonder how Mish is going to see if someone is moving your backpack I’ll tell you.

I used the gyroscope of the modulo. I store the actual degrees in some variables and after some milliseconds I check if there was any change.

Since also if you don’t move the backpack at all there are some variation in the measurements, I had to insert an ‘offset’.

The offset #define is actually the sensibility of the alarm.

Since I have a sewing machine and I like to recyclate stuff, I used bike inner tubes to make a small bag to protect my Mish board.

If you want to replicate it is very easy and maybe you can be inspired by my other tutorial about how to build a bag made with bike inner tubes.

I was also thinking to design and print a 3d printed case.

I’ll do it if I receive comments from people that like this project.

Note about Bluetooth and security issues

To have a very safe alarm for your backpack you should change the name of the device and the security code.

For example, I changed my module HC-05 from “HC-05” to Mish and my password is not the default one.

I also thought about how to implement a sort of encryption but I think is not needed right now.

To change the PIN and the NAME of the Bluetooth Module HC-05 we have to follow some steps that you can easily find on the web.

DOWNLOAD everything you need to build your DIY alarm for backpacks.

In this page you can find schematics and code, but what if you want to receive everything in your email?

Just insert your email and you’ll receive everything for free, also you’ll be the first to know if there’ll be an update.

Also, other any kinds of Arduino is good. I advise the nano because it’s compact and it has a mini USB, this means that we can use the power bank instead of a dedicated battery and the connector is way stronger than micro USB.

Why not a dedicated battery?

I didn’t put a dedicated battery for two reasons: it’s something that you have to check if it’s changed or not. In this way, you only have to think about the power bank.
The second reason is that I honestly don’t like putting batteries around the planet. Sometimes we have 100 devices and we just use one a time. Wouldn’t it be better to just use one battery instead of 100?

Are you going to design a circuit so it’s easier to build?

I was thinking to do it but only if people are interested in Mish.

If you would like it please send me a message somewhere and I’ll do all my best to accomplish it.

I can design the circuit. Can I?

Of course, just send me a message so we can work together

I have a nice idea for the project…

Write to me, I love collaborating with people!

No votes so far! Be the first to rate this post.

This site uses Akismet to reduce spam. Learn how your comment data is processed.